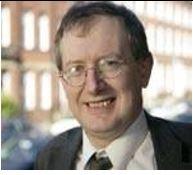 He is the author of many books and journal articles including the following:

He has considerable experience of working on law reform projects including in Hong Kong and most recently for the European Commission on the harmonization of
insolvency law in Europe.