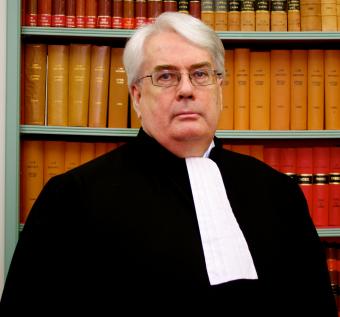 Mr. Justice Frank Clarke was born in Walkinstown, Dublin in October, 1951. He was educated at Drimnagh Castle CBS and University College Dublin where he was awarded a B.A. in Mathematics and Economics (1972). Having completed his legal studies at King's Inns he was called to the Bar in 1973. He practised at the Bar from then until his appointment to the High Court in November 2004. He had become a senior counsel in 1985.
During his time at the Bar he practised mainly in the commercial and public law fields (including constitutional law). He was twice appointed by the Supreme Court as counsel to present argument on references of Bills to the Supreme Court by the President under Article 26 of the Constitution. He also acted as counsel to the Public Accounts Committee on its inquiry into the DIRT tax issue and was external counsel to the Commission to Inquiry into Child Abuse (Laffoy and Ryan Commissions).
While at the Bar Mr. Justice Clarke served for many years on the Bar Council including a term of two years (1993-1995) as its Chair. He also served as Chair of the Council of King's Inns from 1999 until 2004. He was a member of the Council of the International Bar Association from 1997 to 2004, serving as co-Chair of the Forum for Barristers and Advocates (the international representative body for the independent referral bars) from 1998 to 2002. He was elected as an honorary member of the Canadian Bar Association in 1994 and admitted as an honorary member of the Australian Bar Association in 2002. He has been a Bencher of the Honourable Society of the King's Inns since 1995.
In the academic field Mr. Justice Clarke was a professor at King's Inns from 1978 to 1985 and has been Judge in Residence at Griffith College Dublin from 2010 to date. Mr. Justice Clarke was appointed Adjunct Professor in the Law School in Trinity College, Dublin in September 2012. Mr. Justice Clarke has been invited to speak at many international conferences, some recent examples being the Annual Conference of the International Association of Insolvency Regulators on the topic of the Irish Examinership model (September 2010); the International Bar Association Conference on the topic of the Comparative Experience of Commercial Courts in Common law and Civil law jurisdictions (October 2011); and the Hawkamah Judicial Colloquium on Reform of Corporate Insolvency Law in the Middle East North Africa Region (MENA) in Dubai in December 2011. He has served on the board of the Irish Law Reports Monthly and is the nominee to represent the Chief Justice on the Incorporated Council of Law Reporting for Ireland.
While a judge of the High Court Mr. Justice Clarke served as Chair of the Referendum Commission in relation to the Second Referendum on the Lisbon Treaty. He was mainly assigned to the Commercial List of the High Court although also involved as the judge presiding over the establishment of a Chancery and Non-Jury List for the first time in Cork.
Mr. Justice Clarke was appointed to the Supreme Court in March 2012.